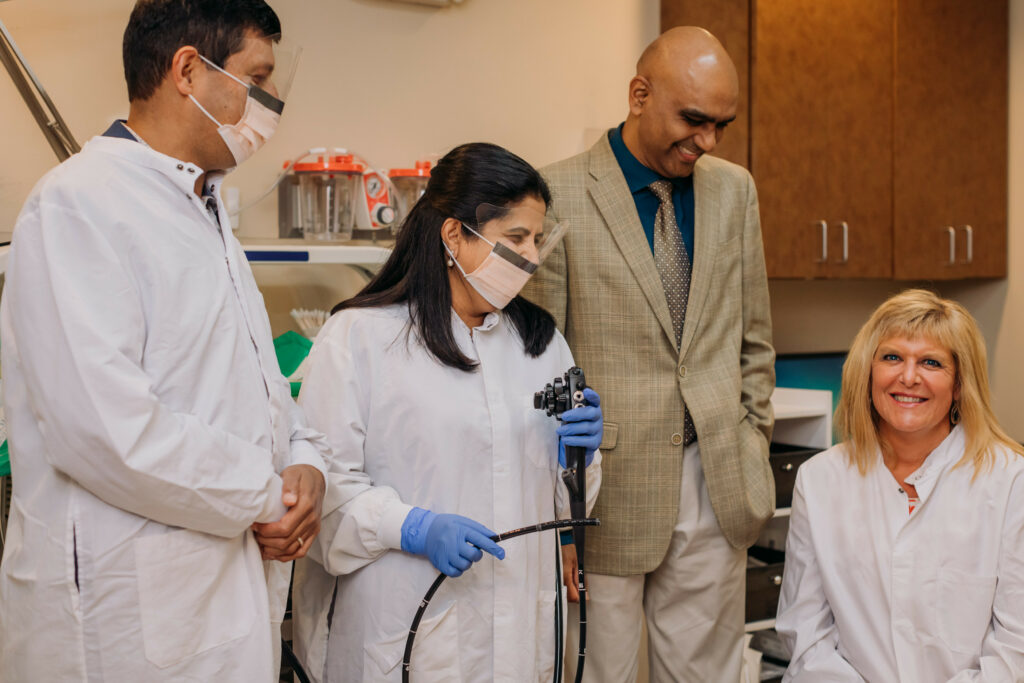 GERD may be defined as excessive or symptomatic backward flow of stomach content, usually acidic, into the esophagus. Typical symptoms include a burning discomfort beneath the breast bone, sour taste in the mouth, and/or regurgitation of food and stomach contents. Less often, GERD can cause unusual symptoms of unexplained cough, asthma, hoarseness, and/or sore throat. GERD symptoms are often worsened during pregnancy. Long-standing GERD, however, may cause more serious problems. Acid reflux may cause esophageal ulcers, strictures or narrowing of the esophagus, and a pre-cancerous disorder called “Barrett’s esophagus”. There are excellent, safe medications for GERD and endoscopy is recommended to examine the esophagus in order to exclude and/or follow important complications of GERD.

IBS is a very common GI condition seen in approximately 20 percent of the US population. It is much more common in women than men. Common symptoms are chronic abdominal pain and/or discomfort associated with altered bowel habits (diarrhea, constipation, or both). IBS is the second leading cause of work absenteeism. Patients with IBS often suffer from overlapping depression and anxiety. IBS is not life threatening, even though the disorder can cause a great deal of discomfort and distress. Talking to a specialist and ruling out other disorders is often very helpful for patients. There is no “cure”, but a specialist may help lessen one’s symptoms.

IBD is defined as a chronic inflammatory condition of the bowels that often affect women during their child-bearing years. It is much less common than IBS. IBD has two main types, Ulcerative Colitis and Crohn’s Disease. Some women remain childless for fear of the disease transmitting to their offspring, have a fear of intimacy, or have painful intercourse. Women with active Crohn’s disease can have difficulty with conceptions and/or carrying a healthy baby to term. There have been significant improvements in IBD treatment in the last 10 years, especially with better, safer medications. Many women with IBD have questions regarding their reproductive health, and need special attention before and during pregnancy. Most IBD medications are safe to administer during pregnancy. The best chance for a healthy baby is being a healthy mother.

Gallstones are much more common in women than men, and may occur in up to 20 percent of American women. Most people with gallstones have no symptoms. However, the most common symptoms of gallstones are severe pain in the upper abdomen with associated nausea, vomiting, and radiation of the pain to the back or shoulder blade. The finding of gallstones without symptoms does not require gallbladder removal. Gallstones can be especially problematic during pregnancy. Symptomatic patients should undergo a relatively simple laparoscopic cholecystectomy to avoid potentially more serious complications in the future like gallstone pancreatitis or retained common bile duct stones that require potentially more invasive, riskier procedures.

Fecal incontinence is involuntary or the inability to control the discharge of fecal matter through the anus. Its prevalence is much more common in women, especially the elderly. A history of traumatic childbirth often accompanies fecal incontinence in women. Of course, fecal incontinence can be quite embarrassing and lead to social isolation. A specialist can help exclude more significant diseases and manage the symptoms more effectively. Surgery or significant invasive procedures are rarely required to manage this condition.